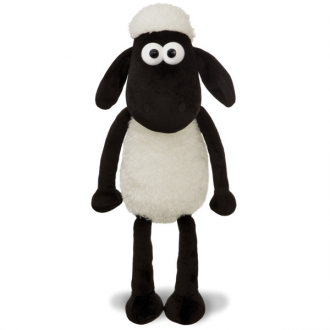 With super soft fleecy wool this Shaun the Sheep soft toy will make a cuddly companion for fans of the hit TV show!

Size: 27cm sitting or 42 cm standing (please note Shaun does not stand by himself).

Shaun the Sheep  is already a well known and much loved character who was first on our screens as the sidekick of Wallace and Gromit, in the award winning short film, “A Close Shave.”
Now he is back in a spectacular fashion in his very own TV series, where every day brings a new adventure for Shaun, including synchronised swimming in a sheep dip and playing football with the Naughty Pigs. With high-energy slapstick and classic silent comedy in Aardman’s world-beating animation style, Shaun appeals to all age ranges.

One thing’s for sure – when Shaun’s around, the countryside will never be the same again. Shaun is a sheep who doesn’t follow the flock – in fact, he leads them into all sort of scrapes and scraps, turning peace in the valley into mayhem in the meadow. Shaun and his pals run rings around their poor sheepdog Bitzer, as he tries to stop the Farmer finding out what’s going on behind his back. Jasnor's range includes plush toys, animated and motion toys, beanies and accessories that bring the baa..rilliant characters from the much-loved television and DVD series to life.