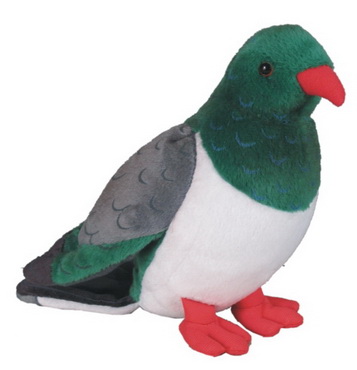 We usually hear the whoosh, whoosh, whooshing of a Kereru's wings before we see it, and more often than not, they're flying a little too low, and acting like they're under the influence. I don't know about you, but the kereru delights me, and this lovely little toy will delight children of all sizes, especially when they squeeze its puku and hear the real kereru birdsong.

Please note, our photographs shows a darker green than this soft toy really is.

Diet: In the wild: Prefers fruit of native trees, also eats flowers and young leaves of some native and introduced trees, especially when fruit unavailable. Karaka, Tawa and Taraire are dependent on Kereru for the dispersal of their seeds.
Zoo diet: Chopped apples, silverbeet, wheat & pellet mix, daily. In the FreeFlight Sanctuary feed stations and surrounds are cleaned weekly.

Breeding: October - March mainly.
Nest: A shallow platform, usually 2 to 6m above the ground, made of loosely intertwined sticks which will be continually added to. No nest lining.
Eggs: 1 smooth, white, oval incubated by both male and female for 29 to 30 days.
If the egg is lost ,another may be laid if early in the season.

Chick: Sparse yellow-brown down, grey-brown feet and beak. Stays in nest for 11to12 weeks. Fed on creamy protein-rich liquid called 'pigeon milk' which parents secrete from the wall of their crop. This is gradually replaced with regurgitated fruit. Fledge around 40 to45 days.

Total protection was granted in 1921, but illegal hunting continues